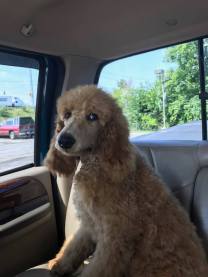 Traveling With Your New Puppy

The puppy may be a bit nervous as it will only be his second or third time in the car. Although most will take the ride home just fine, an occasional pup will be nervous. Some salivate and occasionally one will vomit when they are nervous.  A pup may be soothed when held on your lap but do keep towel under him just in case.  A crate for longer trips is advisable. Line the crate with a washable, absorbable liner (an old towels works well) and bring an extra liner in case the puppy gets car sick. A wet towel in a zip bag for cleaning up would also be a good idea.  If he throws up or salivates just remember he is loosing fluids so make sure he is replenished throughout or after the ride. If your trip is more than 2-3 hours, you might want to bring a water bowl for drinks, as well as a leash and harness for letting the pup relieve himself. It is not ideal to put a puppy down on the ground in a public place before he is fully vaccinated, but in this situation, it will be necessary. Just be sure to not allow him to have too much freedom while he is down to relieve himself.  Pups often have to relieve themselves after a car ride so as soon as you arrive home take the pup to the spot where you want him to relieve “go”.  Let him stand there for 3-4 minutes to see if he will go.