Crate training is the most successful method of house training for most people and it would be ideal if you could take off a few days work to devote solely to training. That isn't always possible so we will discuss alternatives later on.

being in there with his sibling so the process has

begun. They will be in a strange home, without mom

andsiblings or their familiar people so it will still be an

adjustment. But they will be familiar with the crate and

used to keeping their bedding clean.

We also start training your puppy, at three weeks old, to use a litter box filled with pine pellets. If you get a bag for TSC or Farm and Fleet and poor some on the spot outside where you want him to go he will catch on quickly that this is to be his spot. 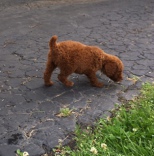 A new pup will generally need to relieve himself about every two hours at eight weeks old. That will increase about an hour for every month they are old - on average – until they are about eight months old.

A pup will choose to go based on 1) what he smells, 2) what he feels under his feet. Keep that in mind and the transition should be smooth.

If you are traveling home with your new pup, you need to plan to stop every two hours. Again, putting a couple cups of litter on the ground will encourage him to go when you stop. it is also, likely that  he will have to "go" after the car ride. When you get home, quickly put some pine pellets where you want him to go and take him to his spot. Make that the first place he puts his little feet - the first place he leaves his scent. If you are training your pup to go in the yard, only give him a small place, like a 3' x 3' area. Don't allow him to run the yard or play. Just have him stand there for three or four minutes. Once he squats gentle give the command to "go potty" or whatever language you want him to learn. 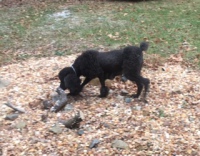 Also, if you are going to travel with your dog often, you may want to make sure he can go on command. You can put a marker like a utility flag or plastic cone (like one used for driving tests or obstacle courses) on his outside potty place to accustom him to having it there. When you travel, simply take the flag or cone, stake it in the ground, and give your command. 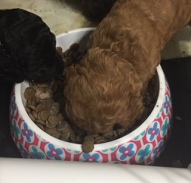 If your pup is eating and drinking well throughout the day, it should be no problem taking his food away from him two hours before bedtime. Very soon, if not immediately, your pup should be sleeping through the noght without needing to relieve himself. 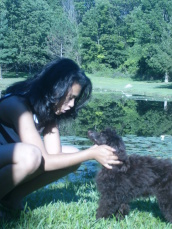 Remembering the main principles will help to put it all together:

1) Pick the place that you want your pup to learn to relieve himslef.

2) Take the pup to his potty spot every two hours. If choosing the yard, don't allow him to wander around the yard. Keep him in his potty place for 4-5 minutes - long enough for him to be bored enough to have nothing better to do than to relieve himself. Then gentle reward, love, and praise him up  . 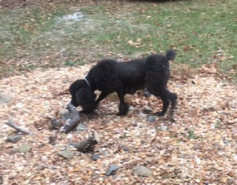 3) Use a special word that they will associate with the command. That will come in handy in a time pinch in the future. My mother always said, “Hurry up!” You can use “Potty,” “Go pee!” or whatever. They will learn to associate the command with the action. Just be sure that while they are in training you say the word when they are going to teach them what it means. After they have learned the comection with the action and the word you can use it as a command. 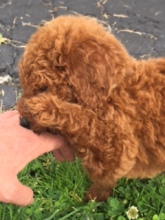 4)  Do not leave your pup without adult supervision. If you cannot watch him, put him in his crate. The reason for this goes far beyond teaching them to potty. You are preventing your pup from learning all bad habits, and here, prevention is your greatest friend. When you are supervising, you will be able to distract and redirect ANY behavior that is not acceptable. Trainers will tell you that pups are learning new behaviors for the first two years so we are in it for the long haul. 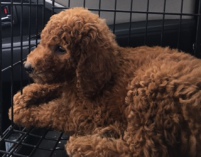 5) Put them in a small, bed size crate if you cannot watch them. They will try very hard not to potty in their crate.

If you are not going to be home for    long periods of time you need to consider having someone to help with the training and take the puppy out for you. 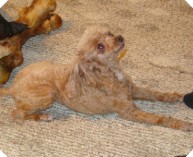 The two most common problems I hear is that the new owner spends lots of time outside with the pups, only to have them potty when they come in and that they relieve themselves in the crate.

If your pup tends to relieve himself when he comes in, don’t allow play time outside until they relieve themselves. Stand in one spot long enough for them to be bored. If they don’t relieve themselves put them directly into their crate. Leve them there and take them back out in 20 minutes. Once they have this idea turned around in their heads you will see results.

If your pup is messing in his crate, sterilize it good and spend a couple days only allowing him to eat in the crate. Pups don’t want to putty where they eat.

Keep in mind that they will have a few accidents.

People frequently ask me how long potty training will take. That is like asking how long it takes to train a child. The length of time it takes will depend greatly on your diligence. The size and age of your pup will determine his ability.

The bottom line, however, is that if you or someone is able to be with the pup for the majority of the day, you will be much more successful and training will "kick in" a lot faster.

Poodles are easy to train and eager to please. That is half of training. The other half is the diligence or the trainer.

(All above pictures are of my Poodles - past and present.)