It is common in about all purebred breeds for people who are stuck with a specific “breed standard” to push back against those who like to live outside the box. Some people fear what they don’t understand. Some people embrace it. Many people simply object to what they aren’t familiar with or don’t understand. It’s not just in Poodles though. Some Dachshund breeders hate dapples. Some Lab breeders hate silver labs. I think the white English Retriever is stunning but some Retriever enthusiasts are against them. It’s not limited to the canine world though. The equine world has the same issues.

Some of us love the different and unusual. Others fear it. Man-made standards have dictates what some would like to dub “the morals” of breeding (Though man cannot actually make a moral code because he/she is not perfect. That is God’s job.) and anyone who steps outside of it is ostracized and said to be damaging the breed.

My argument is that a merle dog isn’t “damaging” (even if it were so) to the solid colored dogs. The solid colors are still solid colors and can still be improved within that line.  Just s the Parti, Phantom, and Brindled patterns brings it’s own uniqueness to the breed, so the Merle adds  bit of uniqueness.

Should we not consider what two lines go together? Of course we should. Technically we shouldn’t breed red and brown Poodles because red masks brown. And brown having liver points could affect a red who is suppose to have black points. But if someone “breaks the rules” it won’t hurt the line that follows the rules strickly.

A conscientious breeder won’t breed double merle and will test any potential breeding dog that has any chance of being merle. But to say that merle is damaging or unhealthy is simply short sighted. There is no science to support the belief that Mm is damaging in any way.

But again, there is so much more to Poodle than color. And there is much more to matching a good breeding pair than color. Health needs to be complimentary. Confirmation should balance between the sire and Sam. And the temperament of the pair should enhance the offspring.

Years ago, parti, phantom, sable, and brindle Poodles and Poodle Breeders of such faced grave criticism as currently do breeders of merle. Some poodle purest were downright vicious and cruel in attacking these breeders as they are in attacking merle breeders now. The same happens when new colors are added. I bred brown Poodles when there wasn’t a place to mark brown (Indecently, the original brown poodle breeders called them chocolate) on the registry.

Keep in mind that the Poodle Club of America’s and AKC originally accepted only solid black and solid white as the top standard for Poodles. All others were considered rejects and were most likely culled by serious Poodle breeders and Poodles “purest” for over 100 years. So, culling was standard until about twenty years ago.

Over time, these patterns have been accepted but as the merle pattern has grown in popularity, they too are now going through this “initiation” process.

The problem with people’s expressed opinions, however, is that it is contextually dependent. Meaning that there may be some truth but when taken out of context it could be half truths or even completely false. The merle debate is not necessarily black and white, so let put it in context.

Myths and Half Truths:

1. MYTH: The merle pattern emerged after the stud book for Poodles was closed.

* Perhaps. The Poodle Club of America was founded in 1931 and Standards for Poodle show accepted by AKC in 1932. True, the stud book did not include merle. It also did not enclose parti, phantom, sable, or brindle which, though they went through the same scrutiny that merle is now going through, is more widely accepted today.

* FACT. Culling was common practice until the last couple decades so they could have recently emerged because they were allowed to live.

2. MYTH: Merle is not in the original Poodles.

* FACT: There is no real evidence that phantom, sables and brindles were present before the stud book closed and people’s who hate merle will most often embrace other patterns at this time. These other patterns have also just (in the broad scope of history) emerged.

* FACT: There is, however, an interesting picture from 1820 (above)that suggest perhaps merle Poodles were around before the stud book closed, however. A close look at this picture will distinguish the difference between the multi shading of the merle and the crisp two color markings of the parti or ticking markings.

3. Merle is not accepted by AKC. False.

* FACT: Like parti, phantom, brindle, and sable, merle is considered out of standard and disqualified for show but to say it is not accepted is a misnomer. * Any poodle whose parents are registered are accepted and registerable. They don’t necessarily have to be at standard. Most aren’t and certainly none of the patterns mentioned above. * If the parents are register, the offspring can be registered. Check their guideline or make a quick call to AKC to verify it. American Kennel Club - Color and Markings

4. The merle color pattern cannot be registered with AKC and have to be falsified. That is just not true.

* FACT: Merle is registered just like other color patterns. The below photo is the bottom of the first page of a merle pup’s registry where the pattern is marked. We mark the primary color in the left and a secondary color in the right. Most of my merle base cost is blue. Some is black. I hope to have brown in the future. 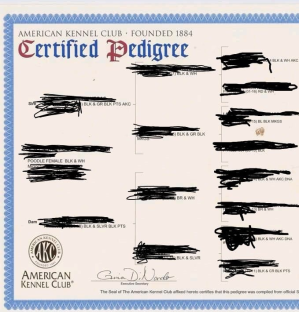 5. MYTH: You have to lie in the registry to register a merle poodle.

* FACT: Along with several of the above answers my compliance letter from AKC would indicate this too is false. (See my web site: OhioStandardPoodles.net) When AKC issues a letter of compliance it means that my “kennel” (or home) AND paperwork are in order and in compliance with their rules. AKC will pull ALL papers and rights of one is found to falsify paperwork.

6. Myth: You can’t honestly mark a color pattern for a merle.

* FACT: The merle pattern is registered the same as any other pattern. You mark the main color, then choose an alternate color.  See the example above.If you take a phantom line and merle line side by side you will not be able to tell the difference by the color marking alone. (Pedigree borrowed with permission.) 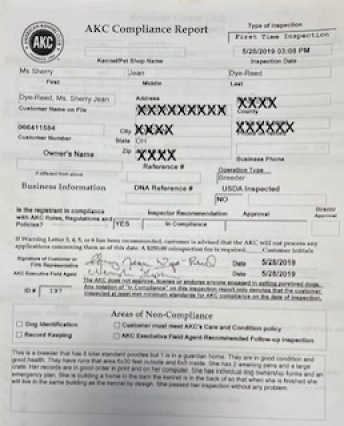 7. .Merle Poodles carry the MDR1 gene, therefore breeding a merle poodle is harmful to the breed.

* FACT: There is no evidence that MDR1 is linked to (Mm) merle. That gene is indeed linked to herding dogs and homozygous (MM) merle. It is not however, linked to heterozygous (Mm) merle.  This is only one reason that a breeder should be educated in genetics and that genetic testing is so important. Not just because of MDR1 but there are many things we need to look for before we breed. Anyone who goes about breeding with simply putting two dogs together is not taking the job seriously enough to be concerned with bettering the breed. https://www.animalgenetics.us/Canine/Genetic_Disease/MDR1.asp

8.MYTH: People who bred merle are just in it for the money. * New and rare does sometimes sell for more until the market is saturated. We still saw that cycle in reds (solid). We see that a lot in red parti now. Some breeders like the innovative and unusual. Some like working outside of the box. Some like challenges. And some would rather have the originally accepted black and white Poodles that are strictly to standard. To say that you are in it for the money because you breed a different color Demi is he’s the value of all the other qualities that make the Poodle a marvelous breed.

* FACT: It doesn’t stand to reason that merle breeders are in it for the money since merles typically sell for the same as phantom and brindle.

* FACT: There are ways to tell if a person is money hungry. How much money they make or what colors or patterns they love isn’t one of them. Does the breeder use quality food, health test parents, have a serious vetting process for potential owners, give extensive health guarantees, vet check puppies, microchip, produce Do healthy pups, and have good reviews? Do they spend time training and socializing their pups? Not every good breeder will do things the same but the above steps are not someone who is “just in it for the money” at the expense of healthy, quality pups.

* One may say that if they either didn’t like the color pattern OR they truly believe that the merle gene carries MDR1 but as we demonstrated before that is not the case.

10. MYTH: One must breed to AKC Standard to be  responsible breeder.

*  FACT: One may believe that and that is their privilege. But one must not be hypocritical and breed parti, phantom, brindles, and sable, because none of these patterns are to AKC standard. Once you step out of that box of solid colors you can no longer object to other patterns.

There is a lot to consider when paring a dam and sire. And there is a lot more health issues to consider. This is why we do extensive health testing. The same caution should go into every mating, not just merle mating.