History of the Development the Poodle Standard:   Merle, Phantom, Brindle, and Parti

The Poodle history (as is most purebreds) is sketchy but most historians link it back to the French Barbet, Hungarian Mudi, and the German Pudel. The Poodle can also be traced back to the Roman Empire to 1600.

( http://www.poodlehistory.org/PSHOW.HTM ) (https://www.caninejournal.com/poodle/ ), ( http://www.poodlehistory.org/PSHOW.HTM ) There working history is retrieving, herding, and water dogs. French cartoonists also romanticized the Poodle.
AKC was organized in 1885/86 and the Poodle was recognized by the AKC in 1887. In 19
"The Breed Standard is the Blueprint, the Breeder is the Builder, and the Judge is the Building Inspector" --Percy Roberts, breeder/handler/judge
Some would say that Mr. Robert's statement is more accurate in the following revision: "The Breed Standard is the Blueprint, the Breeder is the Builder, and the Judge is the aesthetic-architecture-contest judge."
http://www.poodlehistory.org/PSHOW.HTM
Breed Type is "that collection of specific characteristics which, when taken together, separate one breed from another" (Patrick Ormos, "The Importance of Breed Type", American Kennel Club Gazette, December 1991, p. 72). For example: Breed type enables us to tell the difference between the Poodle, Barbet, Portugese Water Dog, and the Puli. Breed type is and style go side by side. Style is, "the specific way in which the defining characteristics of breed type are expressed" (ibid). Ormos advises: "Breed type should be a priority for every breeder. Consistent style should be our goal."
Confirmation of the Poodle is the baseline for performance and soundness. http://www.poodlehistory.org/PSHOW.HTM.
As far as the original color and pattern goes, these standards were set to be black or white solids; no patterns and no other colors.
However, Parti patterns have been around for as long as history documents the Poodles breed.  Just because the "Breed Standard" is set for one criteria doens't mean that other colors and patterns are not "real" Poodles or can be registered.

Notice that there is no Brindled or Phantom patterns above. I'm not aware that there is any evidence of Phantom or Brindle Poodles in the distant past. 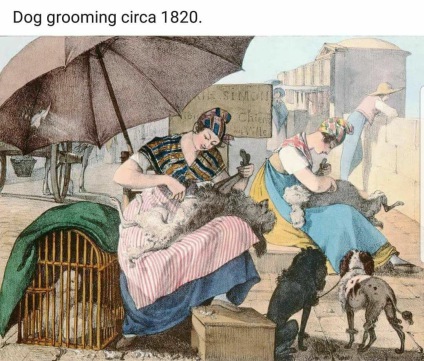 However, one could argue that the above pictures if a Merle patterned Poodle. If you enlarge it you will see that it isn't exactly a crisp ticking as you sometimes find in a Parti Poodle. There is shading; a variety of shades that looks more like the Merle markings.